India has one of the fastest-growing economies. As India progresses in fields like education, tourism, religion, trade, business, science, and technology, etc. the need for translation has diversified. India has more than hundred languages and dialects of which 22 are designated as official languages in the constitution. More than 850 million people worldwide speak the following Indian languages: Hindi, Bengali, Telugu, Marathi, Tamil and Urdu. With the availability of e-content and development of language technology, it has become possible to overcome the language barrier. In order for your audience to connect, it’s essential to cater to them in their native language.

Language translation increases the scope of reaching more and more people. For example, if you are providing your services in Mumbai, you will be able to make an impact in Marathi. Similarly, for the people living in Gujarat, you would reach and attract more audiences in Gujarati.

Machine translation is one of the most important tools for language professionals and the technology can drastically reduce the time and costs involved in any given translation project.

What is Machine Translation?

Machine translation refers to a variety of computational translation systems capable of converting text or speech into other languages. Google Translate is perhaps the most well-known application of machine translation, built using the latest advances in artificial intelligence.

In practice, machine translation allows you to enter text, a document or speak into some kind of microphone as the input source. This input is then automatically translated into the target languages and outputted in the desired format – most commonly text or the original document type.

The latest machine translation systems use a variety of artificial intelligence technologies, including machine learning and neural networks, to constantly improve their output. For example, Machine Translation system by Reverie analyses millions of translations across languages to learn from, whilst also analysing its own results to learn from its mistakes.

The technology powering these tools is immense and their capabilities will only improve further in the future, but this doesn’t mean we are on the verge of perfect AI translation.

Various tools have been developed based on the various Machine Translation technologies as mentioned above for Indian language translation. For eg. Google Translate, Sampark: The Indian Language MT System, Reverie’s NMT API to name a few.

Machine translation for Indian Languages can be seen as an integral part of the global business environment. It can be seen as a virtual assistance to them. Automated translation solutions are gradually becoming more reachable and trustworthy for both small and large businesses. Machine translation has opened up previously unexplored markets by allowing companies to expand their operations to regions, languages, and cultures that they may never have considered before.

Because of its high quality and fluency, everyone in the translation industry, including freelance linguists or agencies benefit from automatic Machine Translation. As a result, translators have been able to take on bigger amounts of work and be more productive as well. Machine translation as a service is now widely available and accessible. The translation is performed by a machine and then rechecked and validated by translators, which adds to the accuracy of the translation process regardless of the type of the document. This service is most popular with those who need to translate content on the internet or in-house documents.

Discussions about the pros and cons of machine translation suggest the technology is competing against human translators. This isn’t helped by the common media narrative of translation technology one day replacing humans – something we still don’t know is even possible, let alone achievable in the near future.

For now, the reality of machine translation isn’t replacing humans but acting as a tool to enhance the performance of professional translators.

When it comes to the disadvantages, this is where the human translators step in to review the output and bring it up to the required quality. Even if the technology manages to translate a part of a project to sufficient accuracy, that’s still a sizable reduction in the workload, time and expense of the project – and, in many cases, machine translation can do better.

Reverie’s NMT is powered by Artificial Intelligence and helps the professional work more efficiently. It supports translation from 22 official languages of India to English and vice versa.

Advantages of Machine Translation for Enterprises

With growing internet penetration in India the demand for digital content in local language is increasing amongst enterprises in order to reach out to the audiences better. But production of original content in different languages is a cumbersome task.

For example, It is really a cumbersome task to maintain Websites for all 22 official languages by an enterprise in order to cater to the audience in their native language.

So Machine Translation for Indian Langugages enables the enterprises to maintain a single website that is rendered automatically in the language of preference of the audience.

Reverie’s Anuvadak has enabled many enterprises like Titan Eye+, Bajaj Allianz, MPL.live and many more to cater to local audiences in their native language by maintaining a single website.

Works done at Reverie with respect to Machine Translation

Reverie has developed an in-house API called the NMT API which can be used to get machine translation from English to 22 Official Indian languages and vice versa.

Reverie’s Anuvadak tool helps online businesses to cater to the audiences in their mother tongue only by maintaining a single website.

Are you a translator or an agency who wants to take up translation projects? Then Reverie brings to you Prabandhak: Tailored to meet all your translation needs, Prabandhak is designed to serve translators, LSPs, and enterprises. Here, you get to allocate tasks, automate, and manage multilingual projects and teams at a large scale on a single intuitive platform.

Want to get in touch with our experts: Click Here 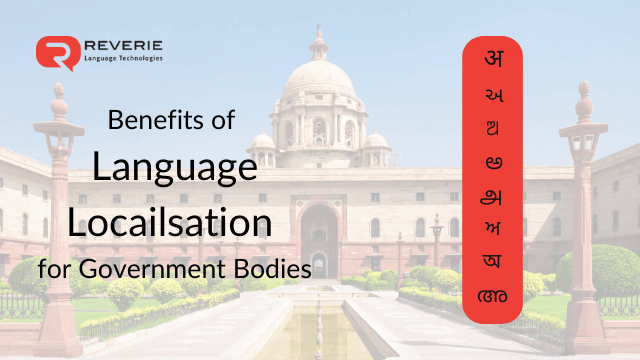 How does Online Language Localization Benefit the Government in Serving Citizens Better?   Today, 5.07 billion individuals worldwide use the internet, accounting for 63.5 percent of the